Our whole website is about youth baseball instruction, so when you are finished with this article, please have a look around. I believe we have most of the baseball coaching subjects covered.

In this article I want to talk about a conversation my 19 year old son and I had. I feel it has a lot of important points for youth baseball coaches.

Brian, who is a freshman on a college baseball team, was home for a rare open weekend this spring. We went to watch a friend of ours coach his 14 year old son.

During the game, the shortstop on this team had made a couple of great defensive plays. But late in the game, with the score tied, he let a ground ball go right thru his legs. You could plainly see he was “playing scared”.

And, of course, one of the coaches yelled out “You’ve got to make those plays!” He’s not the first coach to say that, nor will he be the last. But I doubt if it did any good at that moment in time.

On the way home Brian and I both mentioned that the shortstop was very nervous, “playing scared”, on that play.

And Brian commented that all players lucky enough to play in college are past any “playing scared” problems. If you reach the college level, you have played enough baseball to trust your skills. You may not perform well, but it is not because you fear your coach or dad yelling at you.

At 14 you still might have that problem. Things are going great, then when the game tightens up and the pressure is on, the nerves kick in. If you don’t see the nervousness on the play, then their reaction right after the play is a dead give away. They will be kicking the dirt or pounding their fist into their glove, rather than turning around and helping with the cutoff throw.

When Does It Start?

Where does this pressure come from? Is the coach an overbearing type guy? Does the dad’s yelling still upset the player? Or is it self brought on?

A few weeks before Brian and I went to this game, I watched my grandson’s 8 year old machine pitch team play a game. The team is playing well together, and they have a shot at winning their league. They worked on youth baseball instruction during the winter, so expectations were high.

The team they were playing was near the bottom in the league standings, so my grandson’s team expected to win.

As we all know, so much for assumptions. The game was close and both teams were having trouble scoring. 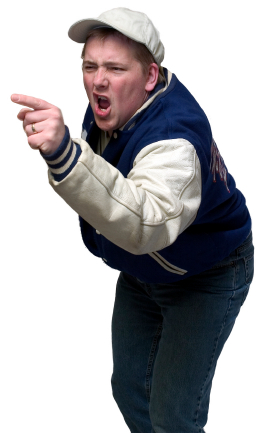 My grandson’s team was in the field late in the game and the go ahead run was on third base. There were two outs and a low popup is hit to the pitcher. The pitcher settles under the popup and just as he about to catch the ball, the shortstop comes running in and bumps into the pitcher.

The pitcher hung onto the baseball and the inning was over. But the coach, who was noticeably upset the whole game, came unglued and starting yelling at the shortstop. And I mean yelling loud.

Well, the 8 year old shortstop immediately starts sobbing hard. Another coach had to take him into the dugout and settle him down.

Later, after my grandson’s team wins the game, the head coach apologizes to the shortstop and tells him he was sorry for yelling at him. But the damage had been done.

No doubt the next time that a game is on the line the shortstop is going to think twice before he makes an aggressive move to the ball. This is where “playing scared” starts.

If you have been around little league baseball much at all, especially competitive baseball, you have probably seen a young player cry after a strikeout or error. They don’t behave that way on their own.

Somewhere along the line a coach or one of their parents has said or yelled something that created this monster. They yelled a lot more than youth baseball instruction.

Brian and I both believe that “playing scared” starts at an age of 10 or under. And every player is different, so with some it doesn’t take too much to develop this attitude.

It is sad but I’ve even heard a coach yell out something that was not youth baseball instruction like, meaning he yelled something mean not constructive. And then the next inning or two he is telling a batter to “relax, and have some fun up there”.

Have you ever heard those words? It’s probably came from someone who has caused the player to tense up in the first place.

So, if you are a youth coach, please stop and think about this. Your actions not only affect your players this season, but even many seasons down the road.